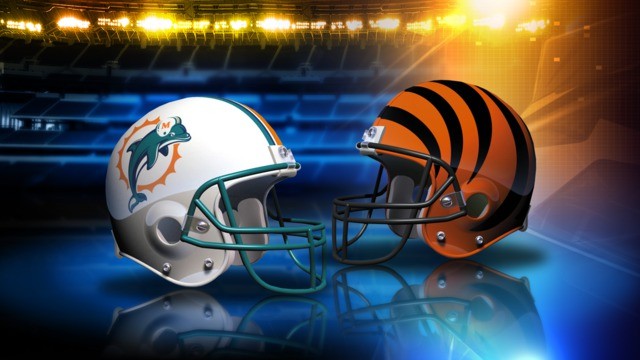 The 1-2 Miami Dolphins head north to battle the 1-2 Cincinnati Bengals exclusively on the NFL Channel tonight at 8:25 pm. The Dolphins lead the head-to-head series 15-5 and have taken the last three games from the Bengals.

Miami quarterback Ryan Tannehill has never lost to the Bengals. Tannehill threw for 319 yards and 3 TDs last week and with the help of wideout Jarvis Landry (who leads the entire AFC with 314 rec. yards) is shooting for three straight games with 300+ yards. Free safety Rashad Jones and linebacker Kiko Alonso are number two and three in combined tackles so far this year and look to up those numbers against a potent Bengals offense tonight.

Expect a high scoring affair as these two teams battle it out for the second win to pull back to .500 and remain a factor in their tough divisions.