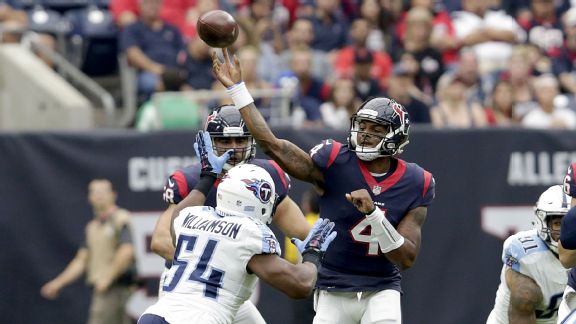 New Orleans, which has not turned the ball over this season, is only the third team in the modern era (since 1933) without a turnover in each of its first four games of a season(1995 St. Louis and 2013 Tennessee). ​

Watson joined Pro Football Hall of Famer FRAN TARKENTON (September 17, 1961 vs. Chicago) as the only rookie quarterbacks in NFL history with at least 250 passing yards, four touchdown passes and a rushing touchdown in a single game. ​

Newton, who has six career games with at least three passing touchdowns and one rushing touchdown, tied Pro Football Hall of Famer STEVE YOUNG, DREW BREES, JACK KEMP, TOBIN ROTE and BILLY WADE for the most such games in NFL history. ​

McGuire and Powell are the first pair of teammates in franchise history to each record a touchdown run of at least 65 yards in the same game.​